Freedom v.s. security, that is the refrain

The best fiction reinvents the way we see reality. Our lives are role play. Sometimes you coincides with it mindlessly. At other times, you open your eyes, you’re suddenly aware, you watch it happen. This is what overcomes you at the spectacular exhibition created by Sylvie Zijlmans and Hewald Jongenelis for the Museum Van Beuningen in Rotterdam. It’s SHOWTIME, announces one of their giant murals. And rest assured, this show is full of masquerades, full of explosions and unexpected encounters – now violent, and then, just as suddenly, in step again with the rhythm of the drums. 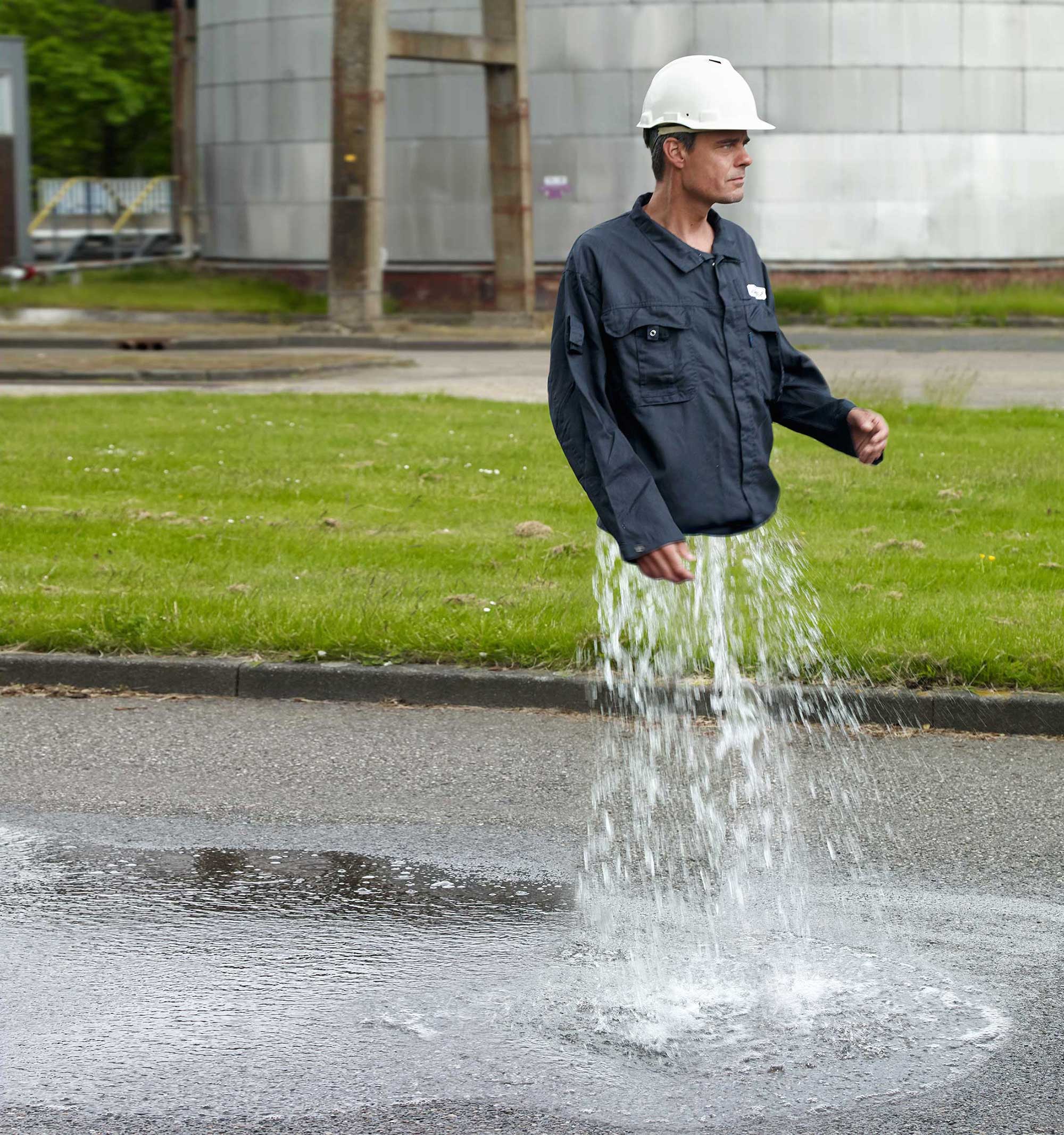 Noise and music, film and theater, visual art, poetry and pamphleteering, street journalism and activism, but humor too and pure magic: the works of Zijlmans and Jongenelis are all this and more. The political is also firmly present, at one with critical engagement flowing forth from their murals, but – how can I say this without giving the wrong impression – there is also con-artistry. The show is overwhelmingly diverse and contagious, it is everything except the willful deception of the public that art has sometimes been accused of, but still in all seriousness: The con-artist, otherwise known here as “the Shady Illuminator”, plays a major role.
[In Dutch the art of conning, “Oplichterij” (literally reading lighting up), is the art of pulling shady tricks. It’s about what you chose to show in the light, and what you keep in the dark.] 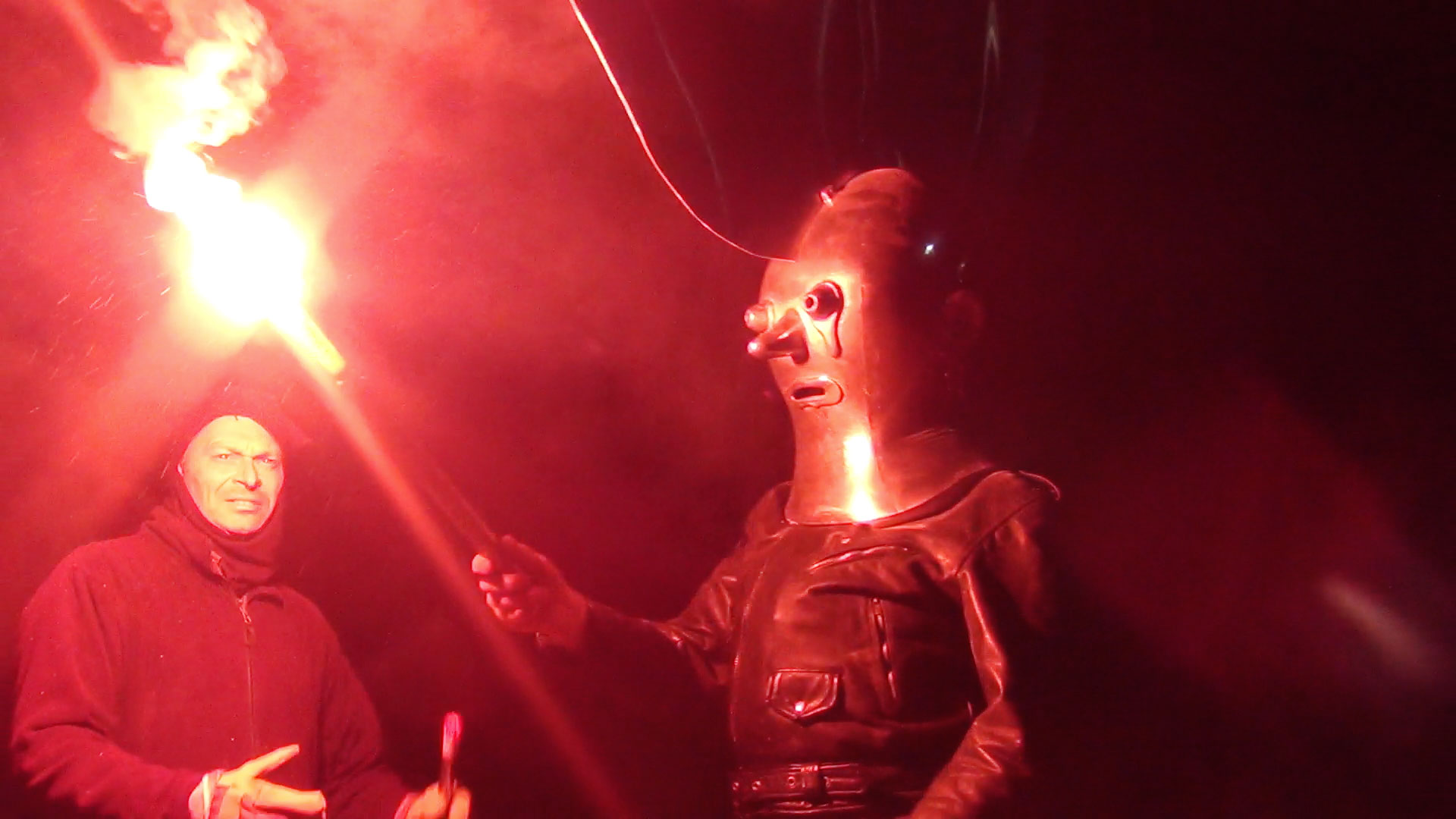 And there, that’s him! We see him close up, the glow surrounding him so warm that we zoom in ever closer. Like moths to the flame. 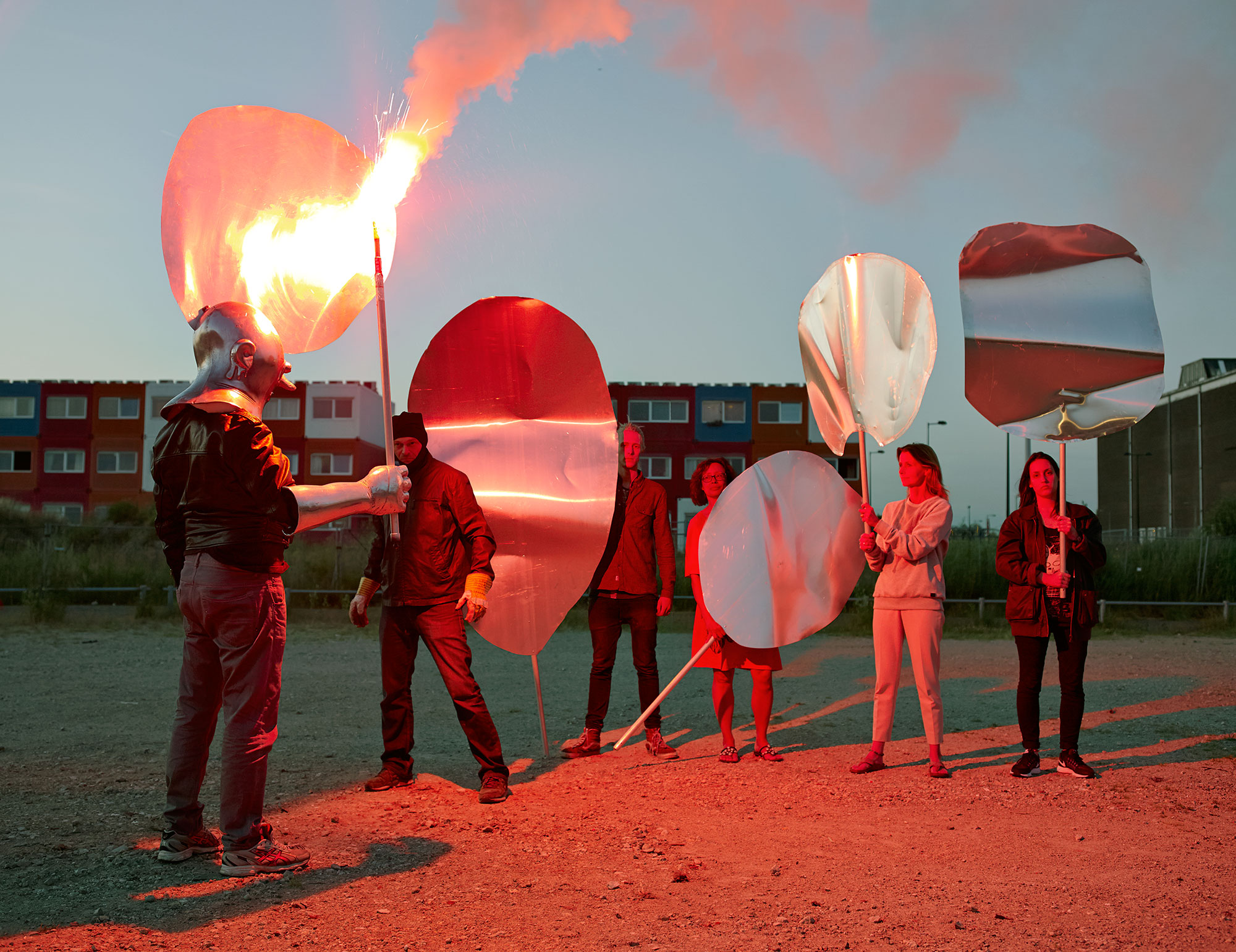 Zijlmans and Jongenelis play with language. Their “shady Illuminator”, their con-artist, is no villain where lies and threats are bubbling in his blood, but someone who, literally, shines light on his surroundings. He does this with flames, with flares or with a flaming torch in his hand, the fire reflected by his rooster comb, a frenzied, oversized metal shield protruding from his head. Despite his explosive side, I see him as a kindred sprit of artists and philosophers, their patron saint even. Without exaggeration. It is artists and philosophers who carry societies burden of reflection: they throw light on our world. This holds as much for the inner world of our thoughts and feelings, as for the greater outer world, the naked reality. 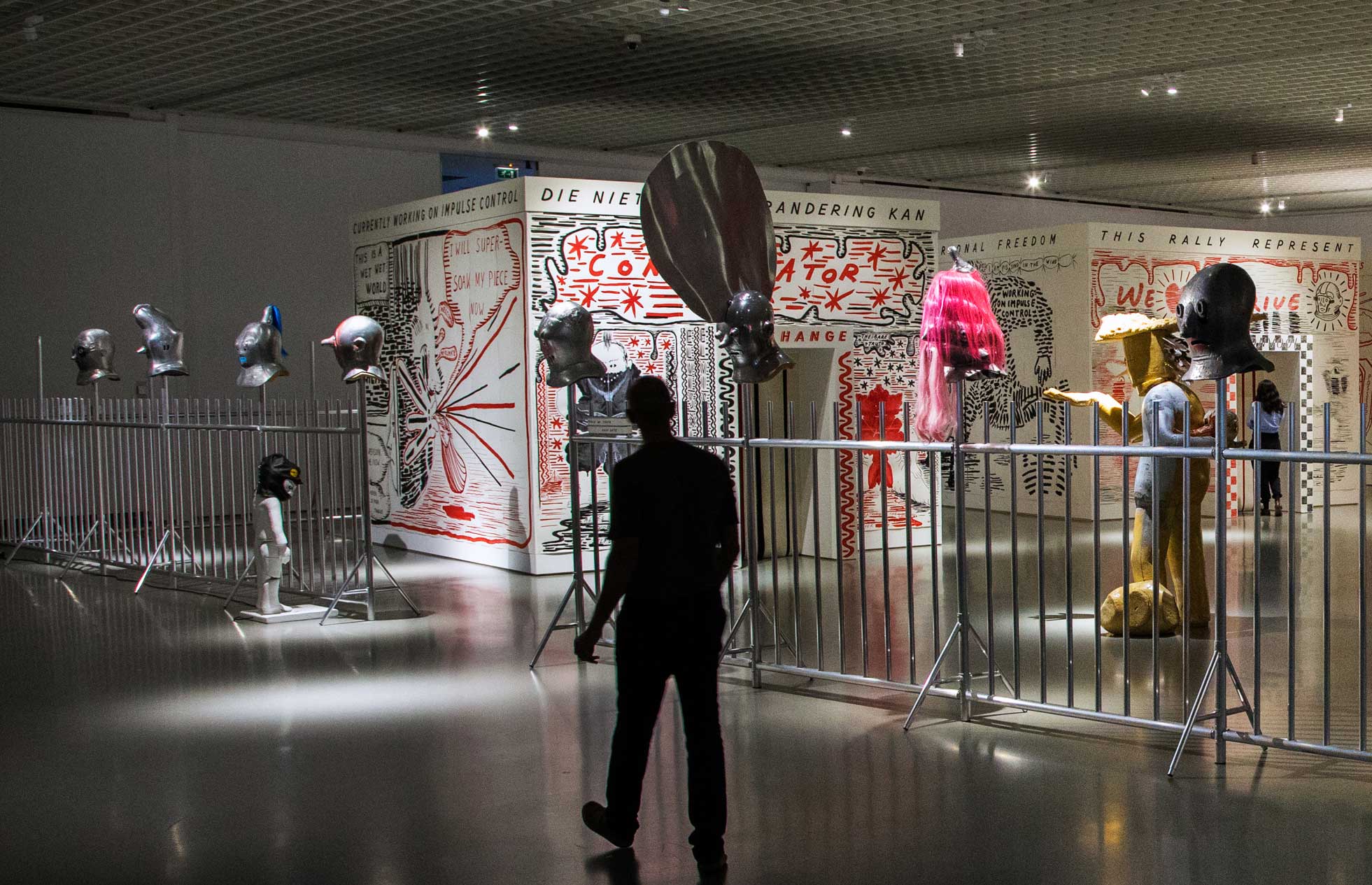 On entering, it seems, if only for a moment, as if their con-artist is but a powerless mask. Rather as a victim than an instigator, his head impaled on a fence among a long row of other heads. Zijlmans & Jongenelis transform the whole museum hall into a fenced off square, a theatrical, but also slightly fearsome, radical zone. Open, closed, dark, light…. Obviously, something here must be fought for. It is not for nothing then, that this fence is called ‘The Fence of Truth” 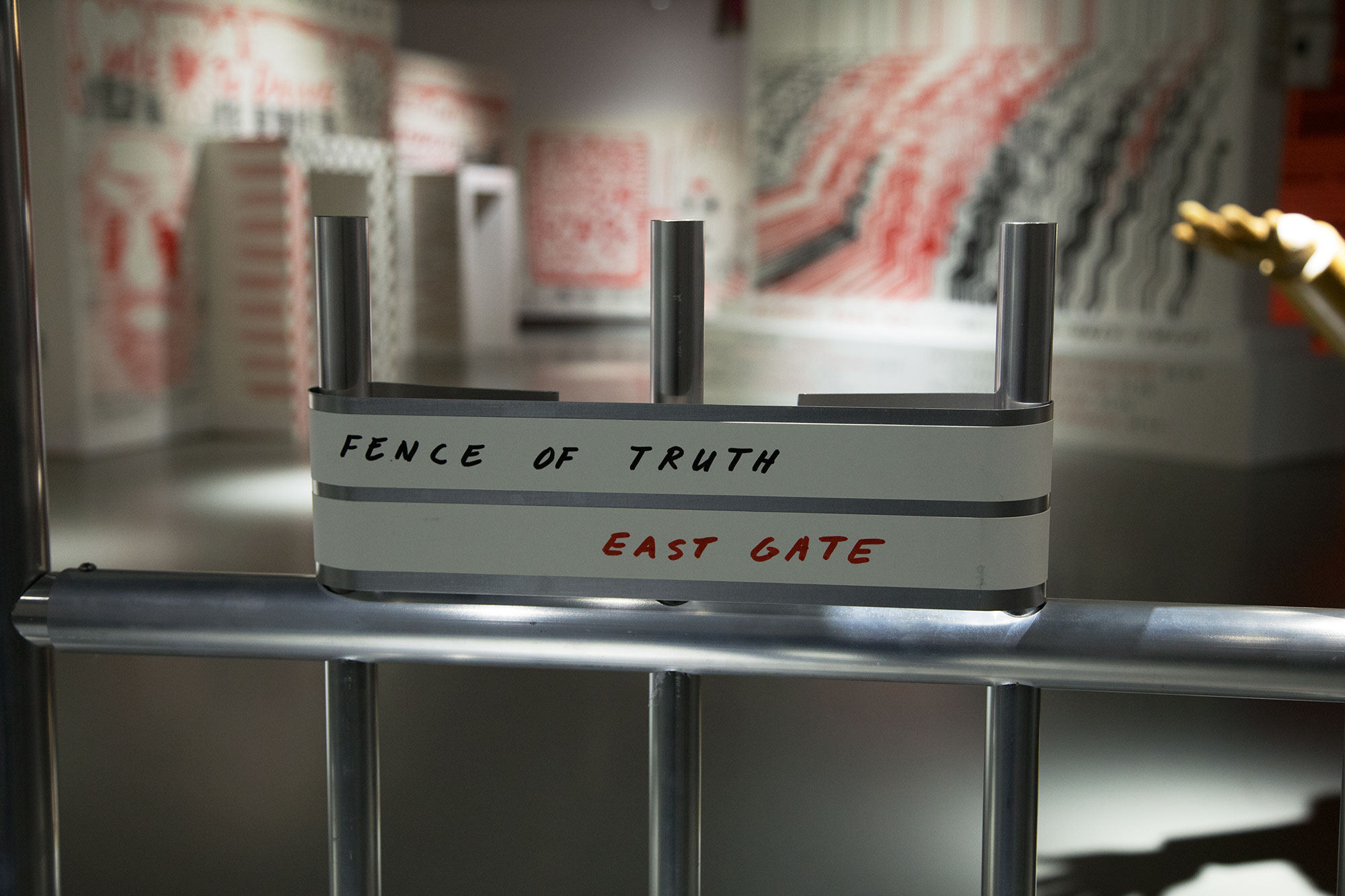 And that they mean business, is emphatically hammered through at a distance. Bang, bang! The noise is caused by a kid with a face of a boxing glove. He kicks the metal fencing with his small, upward swaying leg, provoking the bars and latticework to rock and shake. Does he want to take the fence down? Or force us to go through the opening in the fence? 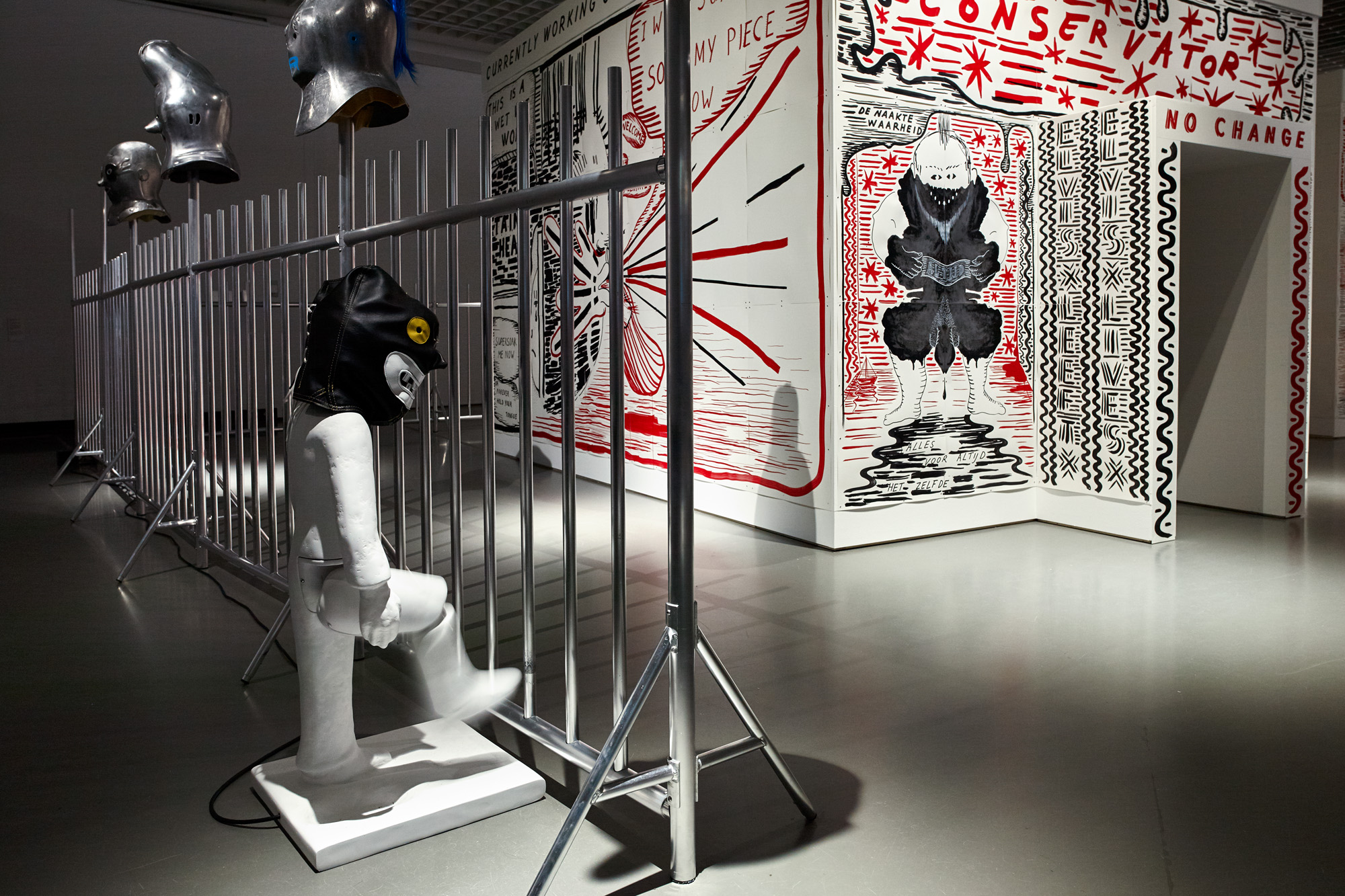 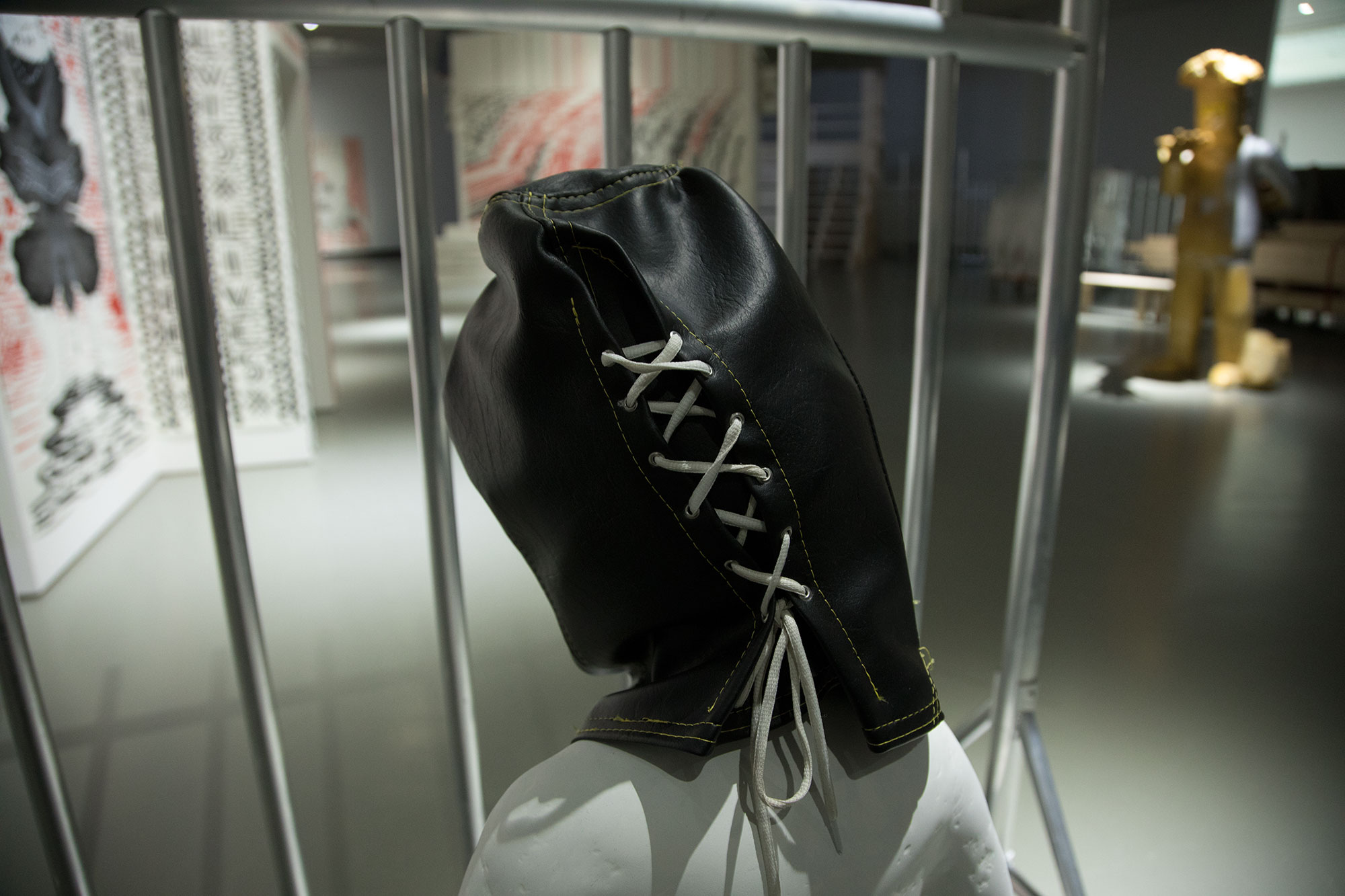 In the square a complete and overwhelming theatre unfolds, with life size figures and painted cabins, a sort of 3D newspaper, where films, photos and info-graphics wage a radical campaign, or in truth an anti-campaign. An anti-campaign for the too quickly changing demographic and society in city districts. Especially true for the “Randstad”, the Dutch metropolis. Freedom vs. security, that is the refrain. Must we actually rescue freedom by putting a fence around it? In the square painful issues become enlarged and sharpened. The city dynamic is thrilling, but also irrepressible. Roads connect, but they also congest. The torrent of information rubs in the notion that the world is always bigger than our neighborhood. There is a refugee crisis going on; a terrorist threat is in the air.

The con-artist plays an active role in setting straight issues of conscience. His mask rests on the “Fence of Truth”, but he also looms in full force in a provisional cinema. We watch him make his forays and exploratory journeys into the city’s edges. In this way he forges a way through the darkness and brings a host of followers in his wake. As if he is the true inheritor of the future and of wisdom, an enlightened being, a shining example for everyone. But while he appears to us shadily out of the shimmering darkness, he is also complicit in it. He lashes out against falling shadows and throws up smoke curtains. Perhaps there is yet a Will-o’-the-wisp hiding in this true seer. 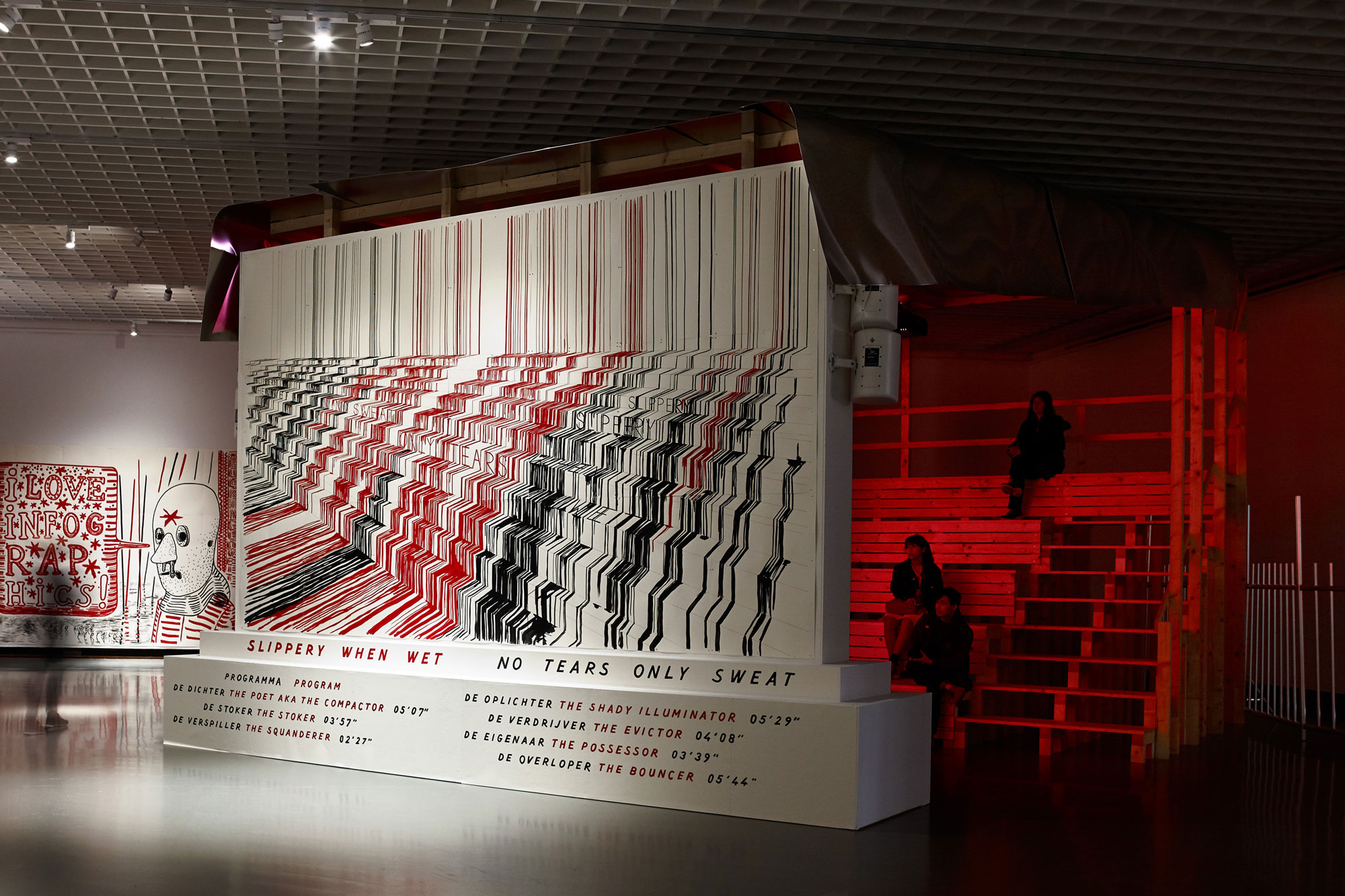 His ambiguity ties him into relationships with the other major players Zijlmans and Jongenelis present to us. Next to “the shady Illuminator”, “the Stoker”, “the Possessor” and “the Evictor” appear. In the presence of the latter front doors are destroyed and residents forced out. There is also the “Conservator”, who can’t stand change, and “the Poet aka The Compactor”, who brings everything closer together. Dark, light, open, closed… 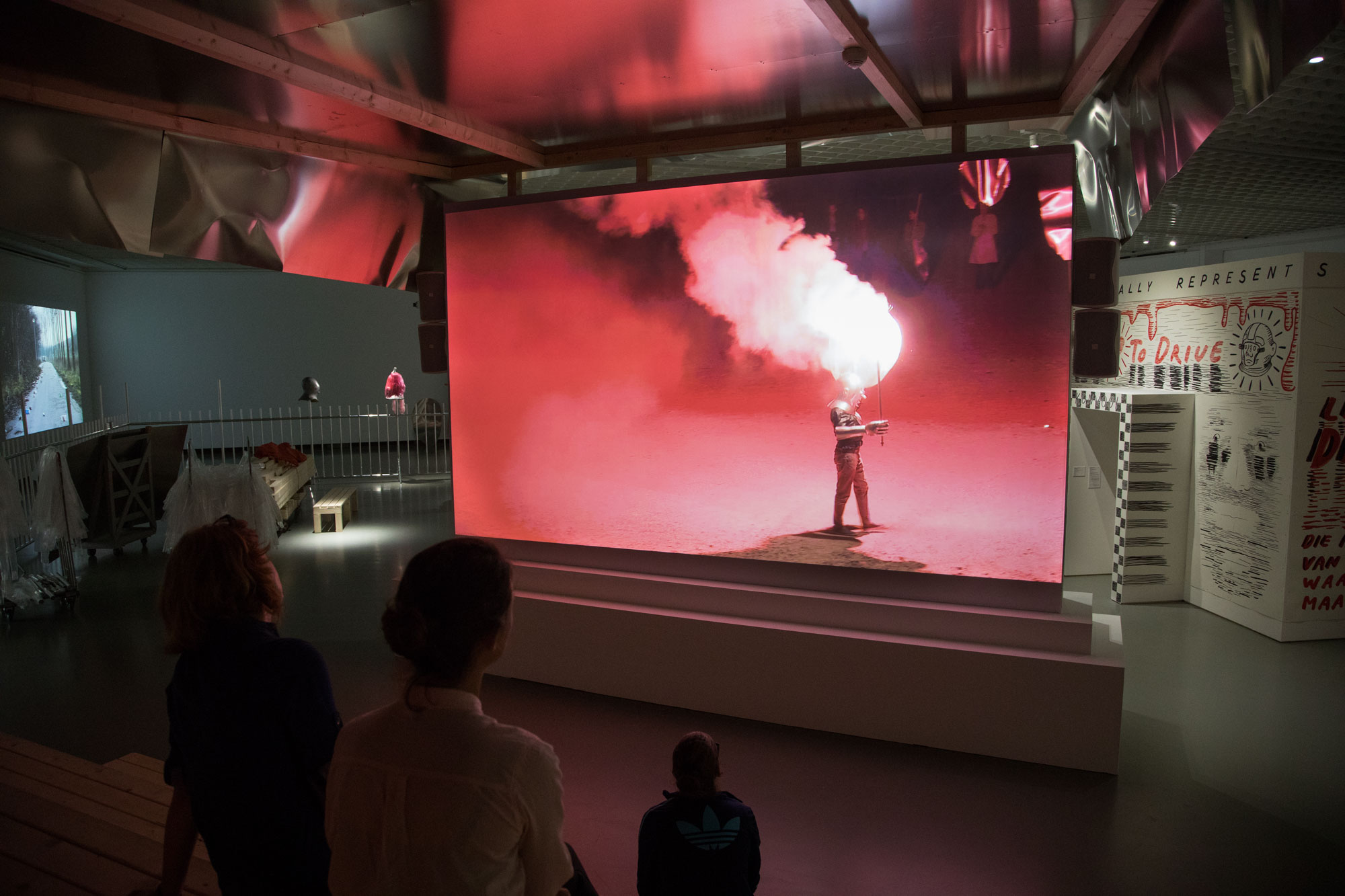 With all of these avatars, as Zijlmans and Jongenelis call them, the artists took off into the city and together with friends, neighbors and other locals, carried out performances. They worked in Amsterdam-North, where they themselves live, but it could just as easily have been Rotterdam-South. The avatars bring actual fears to the surface and highlight conflicts that slumber in city districts. They rise up as mythical creatures, silent but suggestive and beat around the bush in a ritual dance. Almost as if to practice voodoo. 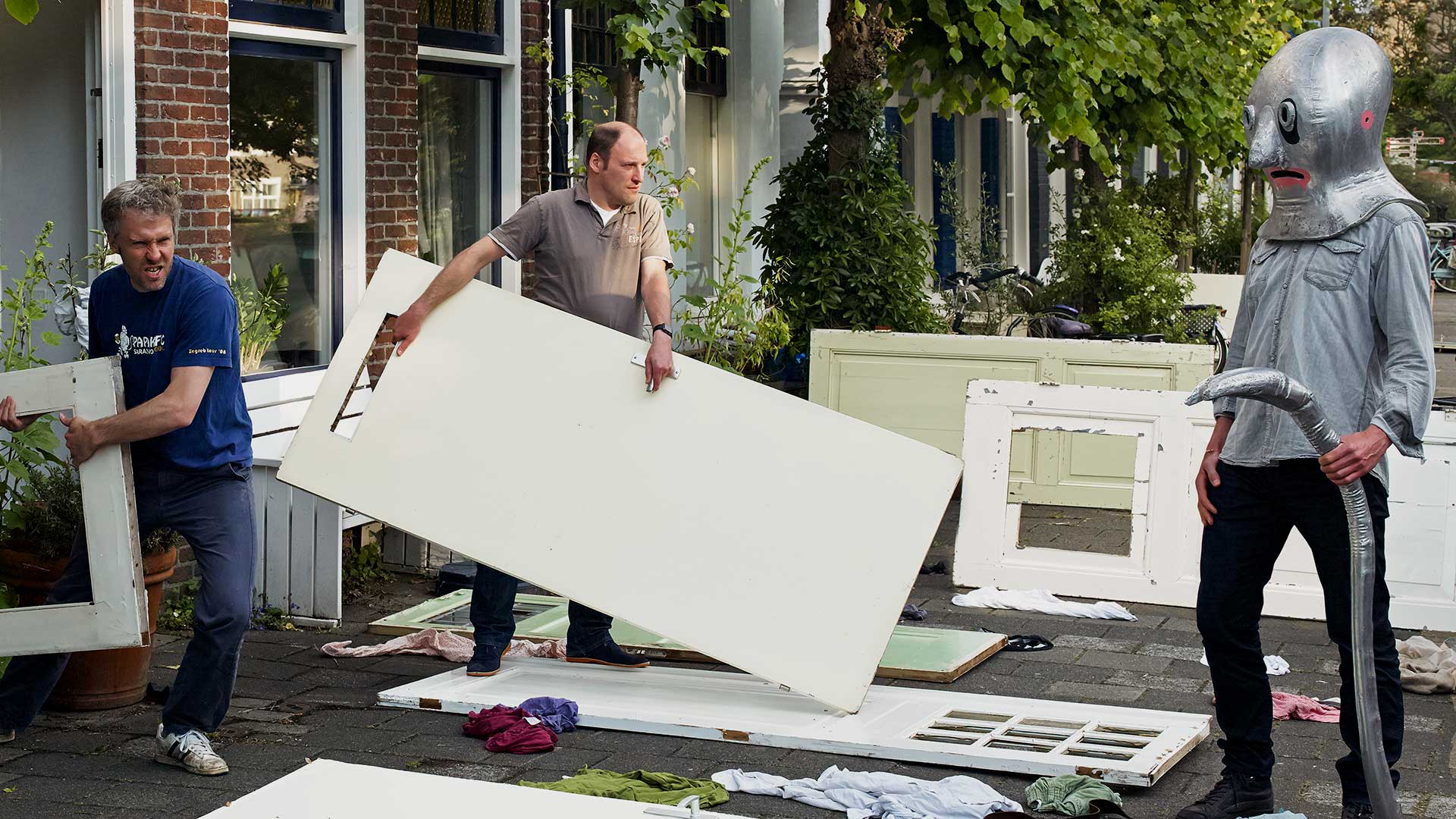 Their performance is as captivating as it is absurd. “The Stoker” comes to shake things up, clattering with manhole covers and letterboxes. “The Poet aka the Compactor”, makes everything which was once open, closed. And under the watchful eye of “the Conservator”, who wants everything to stay the same forever, fences are dragged into place, metal grids, that resonate and rhyme with the fences in the museum. Freedom and security: they trickle through the iron bars. City dwellers with pink masks shove and pull the man-sized grid-work forward. Their progress going in fits and bursts, through the green banks and verges, along the highways.Scraping over asphalt in the neighborhoods of the city, in a mesmerizing dance around the truth, and nothing but the truth.

Go and see, thank you 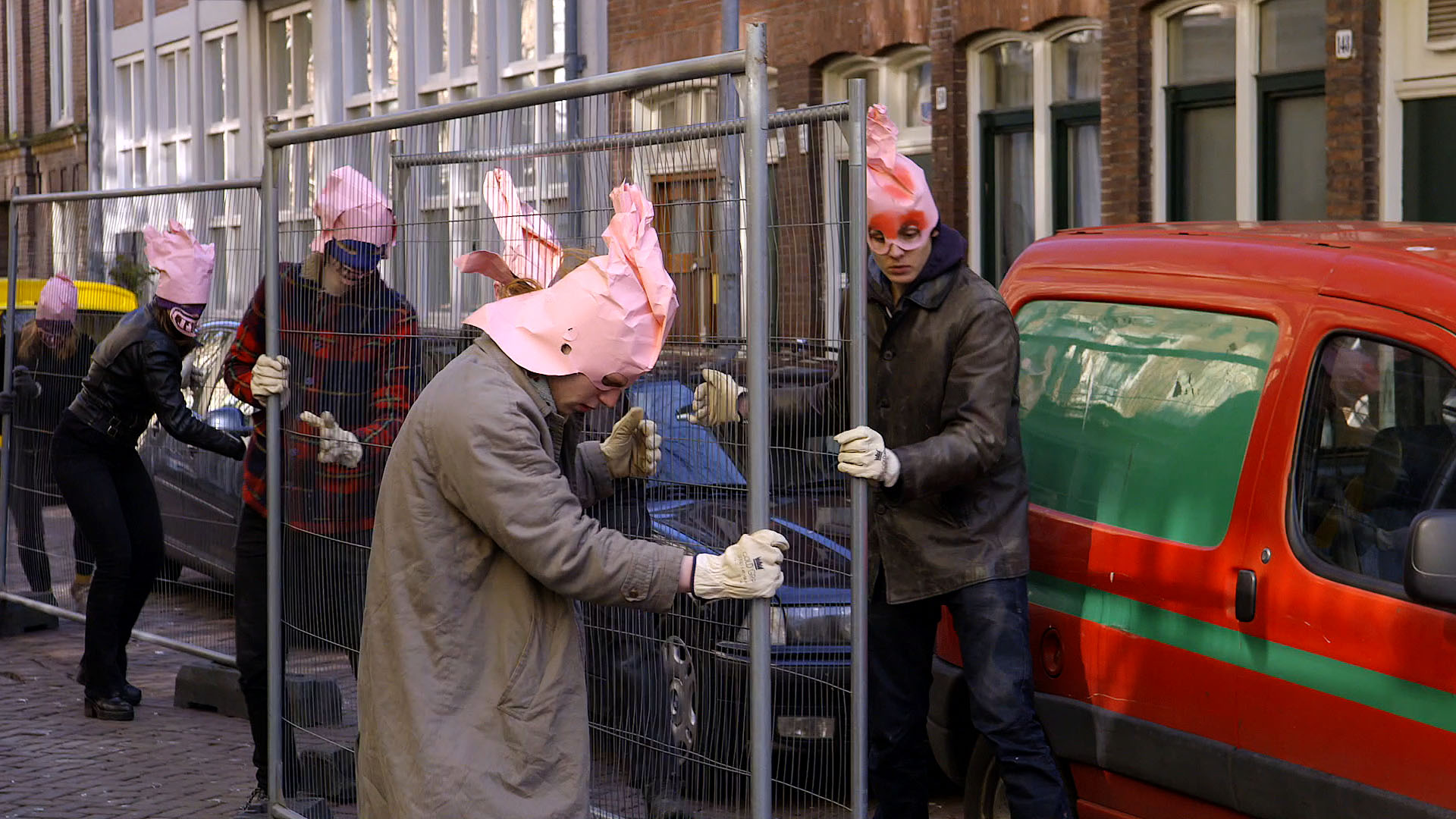 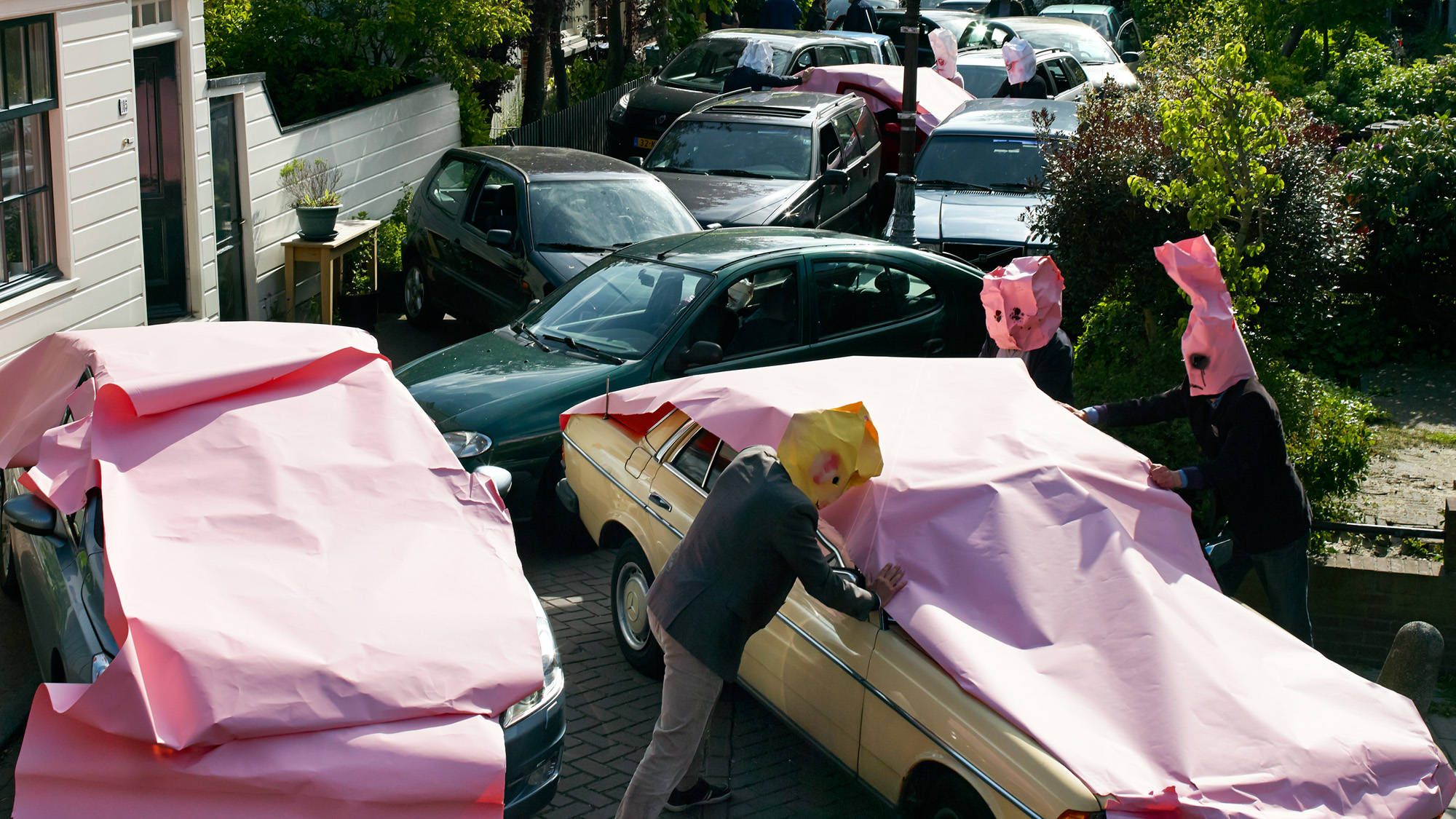 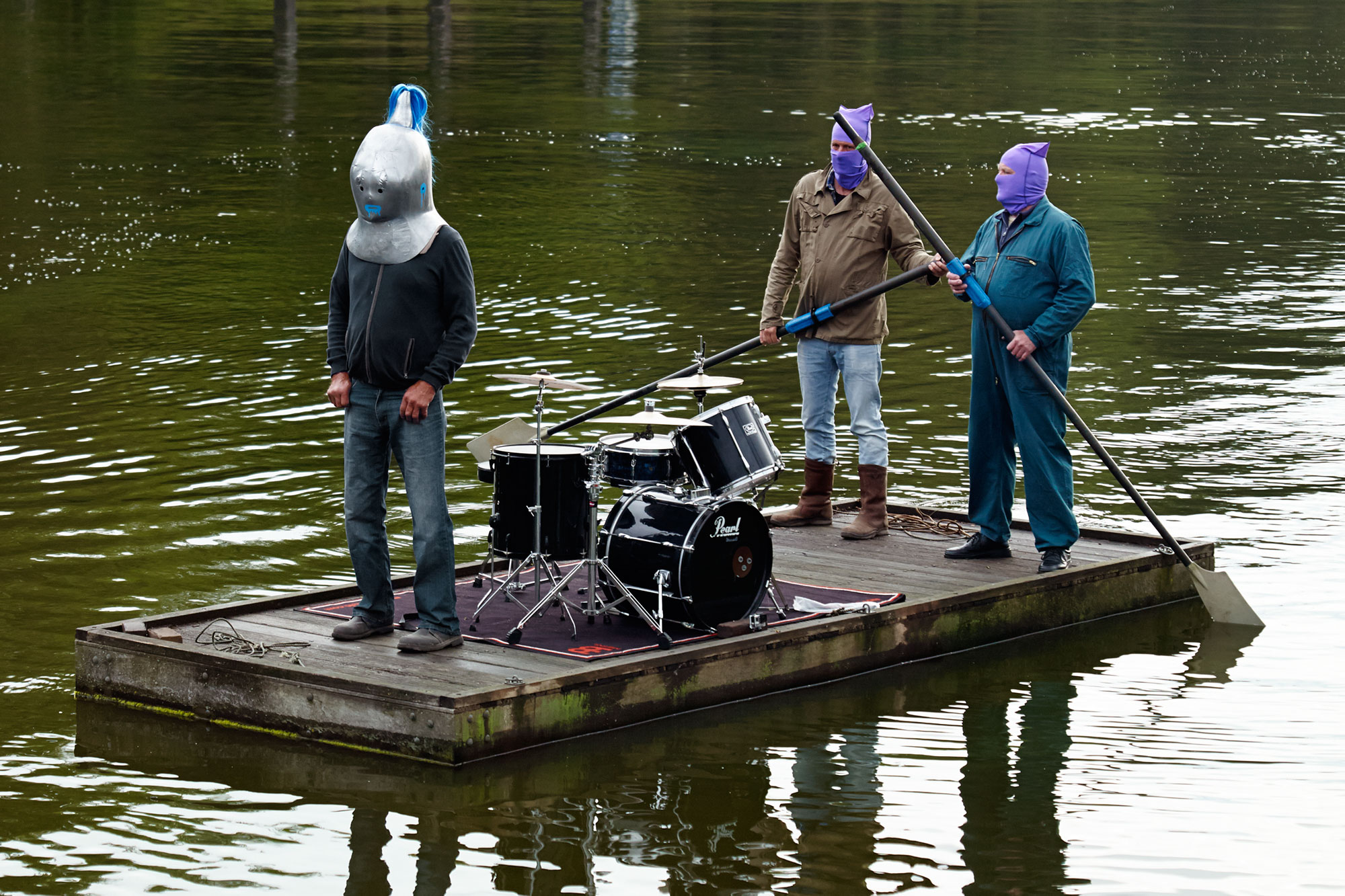 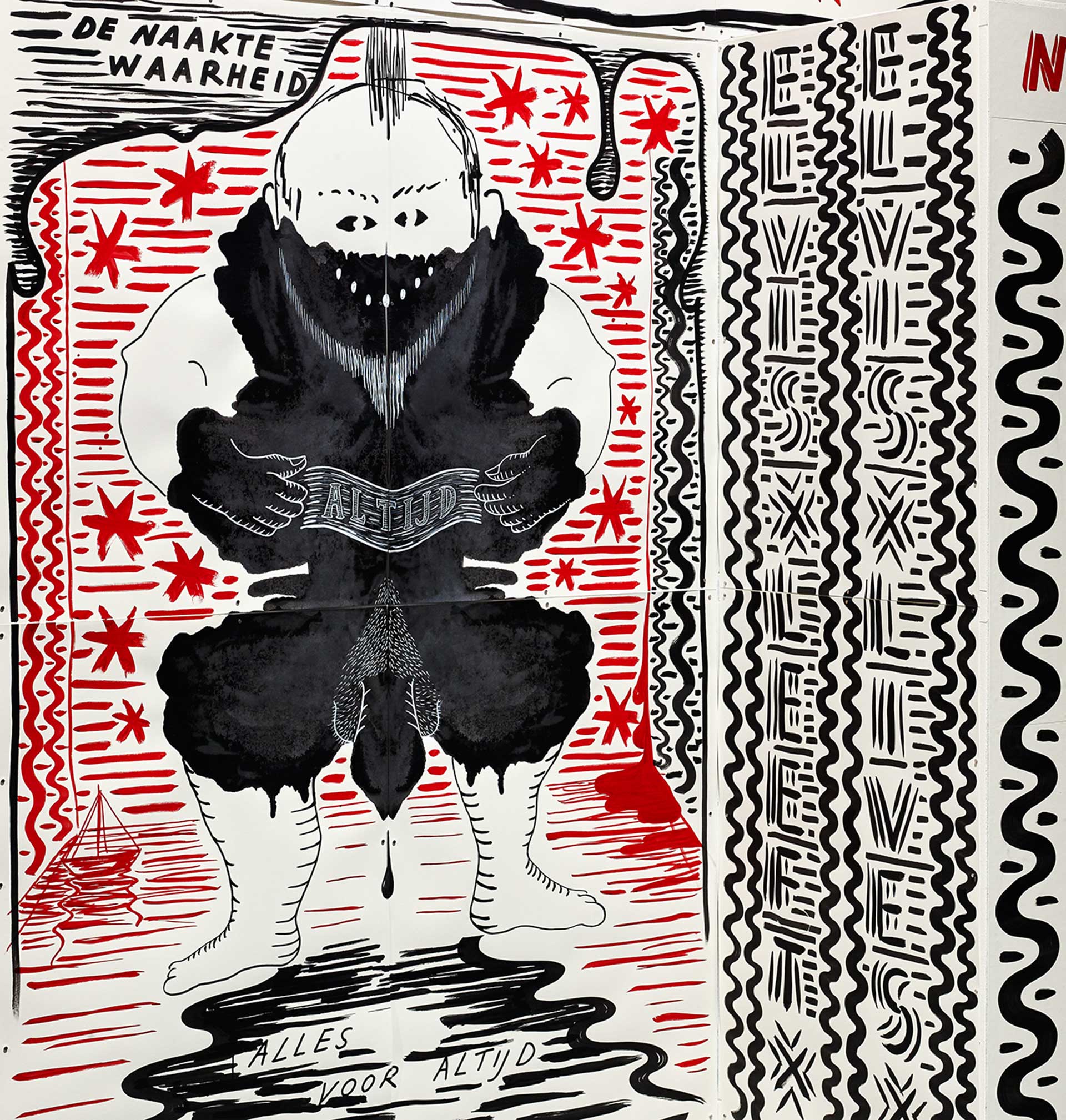